Apart from all these multiple services, Empire Calls offers Payout API to its customers. An application programming interface (API) is a computing interface that defines an interaction between software intermediaries. API basically defines various kinds of calls or the requests that are made, formats the data that should be used and makes the conventions to follow etc. An API is enables modular programming that allows users to use the interface without any help. 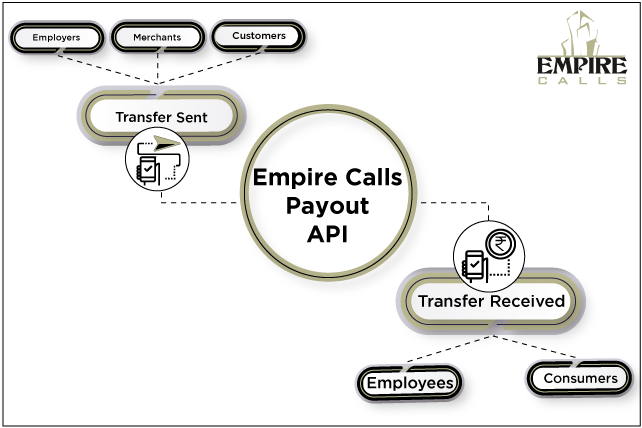 Payout is used mainly to send bulk payments, do quick invoicing in minutes. It is always problematic to retrieve or get the data individually than to get it through the API. The companies can distribute fund from disbursal account to different users directly through their bank accounts and IFSC code via API.

This API payout mainly used in e-commerce industries having multiple services ranging from online shopping to travel booking and much more. Similarly, API is used digital gaming zone and social media sites for user identity. While the financial industries such as banks use it to track check in accounts, credit/debit cards. The vendors make use of API to track the dispatch details of products. At the same time, automotive companies send software updates through APIs. APIs are most commonly used by the employers to pay wages, incentives and travel allowance to their employees.

With Empire Calls Payout API attribute, one can pay to suppliers and employees, and get an accounting done from single place. One has to just tag the payouts.

With Empire Calls Payout API attribute, one can pay to suppliers and employees, and get an accounting done from single place. One has to just tag the payouts.

Empire Calls Payout API would be the moderator between the companies, vendors, investors to employees and customers. This is a very user friendly service and it makes sure that financial security is maintained between the depositors and the receivers. The accounts of both the parties are validated based on their KYC documents and then works accordingly. Thus, in the current era APIs are everywhere and it just takes a minute to transfer the details to the bunch of receivers. These API has now become an integral part of our daily activity be it a social media use, money transactions, gaming zone, online shopping and many more.

Empire Calls is the single point of contact to track and manage the account records. The user can check the status from pending, queued, processing and many more; and can check if the payment is done on time. The payout modes offered by Empire Calls API are IMPS, NEFT or RTGS.

Empire Calls API Payout service is a hassle-free medium that manages finance system of various organizations not only to manage the consumer’s data but also to function them properly as per the requirement of the organizers.